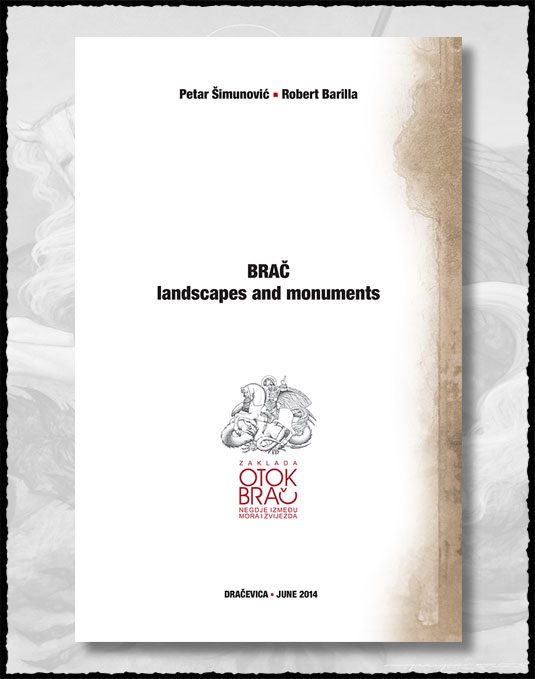 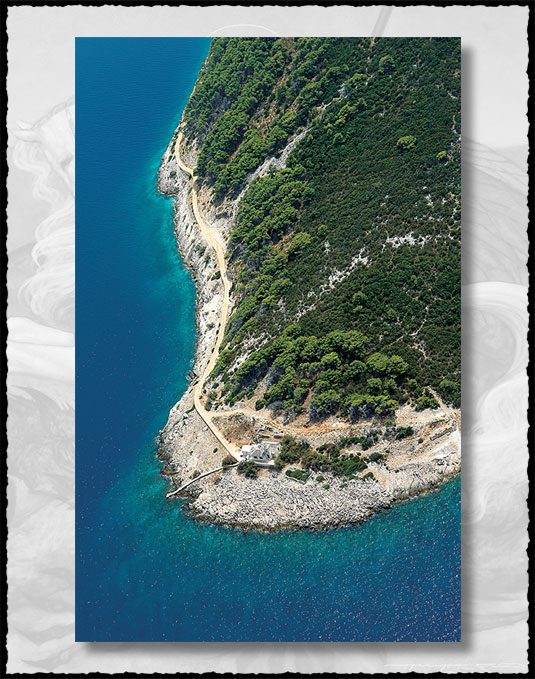 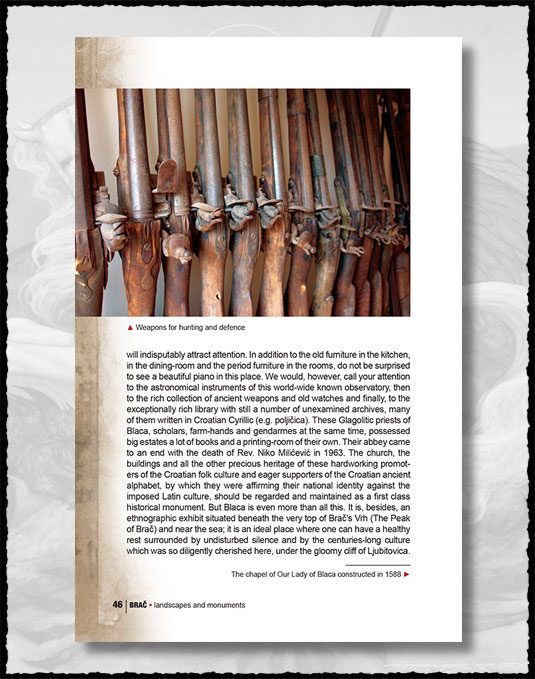 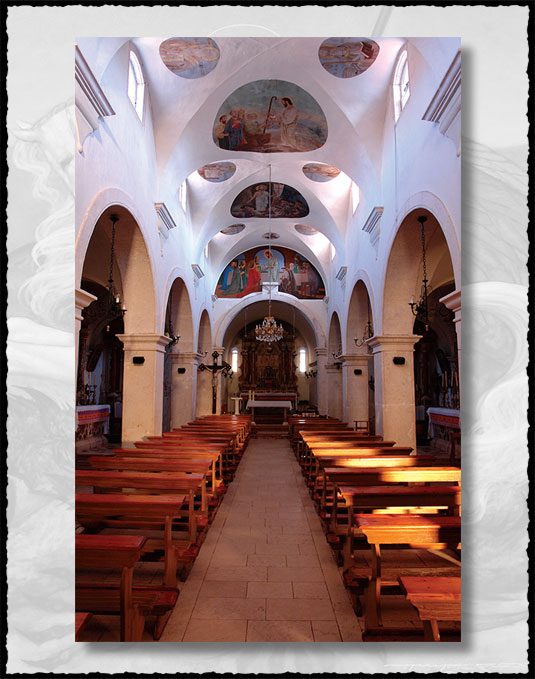 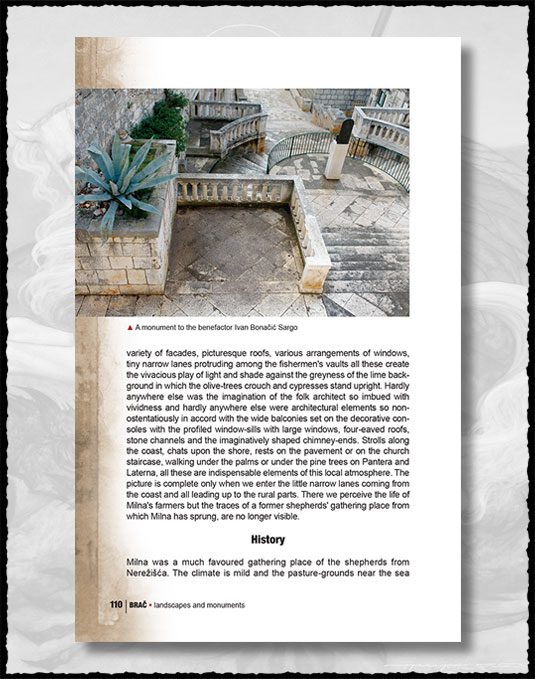 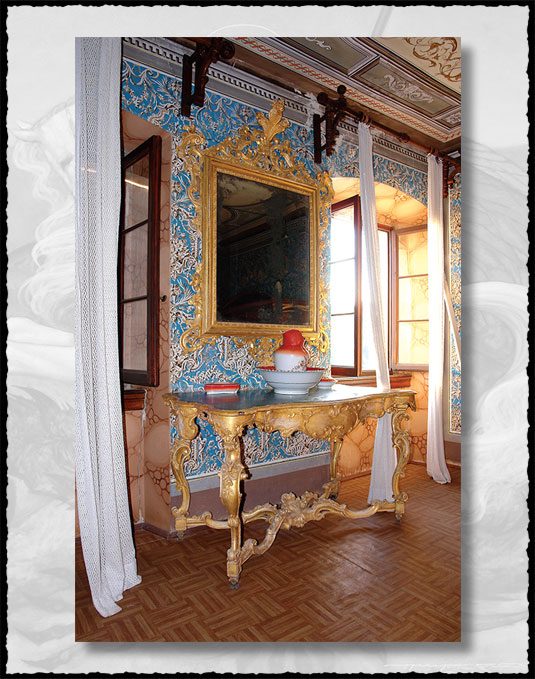 “BRAČ – LANDSCAPES AND MONUMENTS” is the third book in the edition of the Fundation “Island of Brač – somewhere between the sea and the stars.” Co-authors of the book are academic Petar ŠIMUNOVIĆ and Robert BARILLA, while mostly about Brač are talking Vladimir Nazor, Tin Ujević, Ivan Rendić, Jerolim Kavanjin, Ignat Job, Jure Kaštelan, Cvito Fisković, Don Nikola Milićević and many others. The book has 320 color pages printed on high quality paper, lavishly equipped with over 200 graphic attachments and sheathed in hard cover.

All the proceeds intended for the financing of projects of preserving the heritage of the island of Brač.

REVIEW (dr. Josip Belamarić): “The book “BRAČ – LANDSCAPES AND MONUMENTS” is a monument itself which has been written by a writer of incomparable knowledge who dedicated this book to his mother land. He contemplates the past and the present of his island from different points of view: as a historian, an archaeologist, an art historian and as a linguist, describing and interpreting its name, demographic character, climate characteristics, geologic and natural phenomena, history and monumental topography, presenting all these elements in a high literary style. It is a book of almost encyclopaedic dimensions, written in a classical clarity which will be instructive even for the best connoisseurs of Brač because they will often discover an entirely new, fuller context for understanding a variety of known facts and events. As for those who know less about Brač, they will be astounded by the variety of life forms which have been achieved in the long centuries of everyday life. The book has a lot of passages of fiction and scientific literature on Brač; the author used them to create a kind of chrestomathy and anthology of the authoritative statements about certain aspects of Brač history and culture, as well as of the landscape peculiarities. This quite large book, which sums up some important texts of the author on his native island, is richly illustrated by the impressive photographs of Robert Barilla. Taking into account the fact that the author has more than competently summarized the results of numerous archaeological and restoration campaigns carried out in many Brač monuments and sites of over the last fifty years, in which he had direct insights and the fact that the author encouraged and inspired many campaigns by his scientific writing, this book will surely become an authoritative basis for general orientation in all the themes mentioned above. Moreover, I am quite sure that this book will be a veritable one for many years.”

REVIEW (acad. Jakša Fiamengo): “It is certain that the academician Petar Šimunović – in his texts about Brač – is not only a respectable supporter and promoter of Brač’s values, which were promoted long time ago, but also a seeker of lost memories on this island-continent, a great discoverer of hidden facts. Only a skilled comparatist, historian and connoisseur of art, and above all a toponymist and an onomast with excellent knowledge of the heritage of the island panoramas can discover Brač’s values in his everyday life. All this could be said about the author of this book, who knows not only every inch of Brač soils, but also every minute of Brač history, every rock and every plant, every construction and each of its less famous residents, even those who are completely anonymous.”